Richard Hesketh was a successful doctor back home in England, a highly educated man with a Cricinfo profile and a shining future ahead of him. However, like so many others from his home town, Cambridge, he was forced to leave this all behind, pack his worldly belongings in a long wheelie bag and leave his beloved homeland and family. His is a story echoed by tens of thousands across the continent in 2015, on the move in search of a better life. Some flee war, famine, persecution and fear; others are drawn towards jobs and a generous welfare state; still more, such as Richard, are scattered across the continent, rallying at railway stations and leaping barbed wire fences - in search of cricket.

The story of Richard, George, Ben, Ed, Jack, Simon, Mark, Henry, and Rory begins in a migrant holding compound on the edge of Budapest. Such a place must be seen to be believed – many wonder how this could be preferable to life in their home country? How had these men willingly chosen this existence? Denied their basic human rights – access to sunlight, access to a diet other than pork and scrambled eggs, these men subjected themselves to degradation beyond compare. One Swedish migrant, Ben, bullied due to his Easter Island head, recounted tales of waterboarding and spanking.er.

Taking such conditions in their stride, however, these migrants did not lose sight of why they had come to this city. On their first day in the holding compound, several bolted for the nearest golf course before any others had noticed. Easter Island head soon wished he had not, however – the punishment meted out to him at the Pannonia Club was worse than the deprivations of the compound. Needless to say, these men were caught and returned before sundown, having been robbed blind by Mark, one of their own.

On the second day, all nine men managed to escape the compound and stow themselves away inside an empty minivan bound for the town of Szödliget. Conditions were so cramped and humid that the Easter Island headed Ben vomited some sausages into a small plastic bag, and their journey continued in near-suffocating conditions. Arriving, gasping, at the cricket ground, aid workers directed the migrants to useful hedges in which to hide sacks of sausage sick. The head of the Hungarian Invitational XI there, Cocker Spaniel, looked after the men fantastically by putting out a terrible opposition, handing the nine migrants an easy victory. Despite the horrid conditions of the previous few days, bowling first, Andrew posted career best tour figures (4-0-16-3), with Davidson (4-0-19-2) and Steven Snaggletooth (2-0-6-1) chipping in – leaving Dean (2-0-22-0) to really turn the screw. Chasing 121, Ed (26 rtd), Richard (28 rtd), Henry (28 rtd) and Jack (20 n.o.) all filled their boots with runs, with the aforementioned Easter Island head the only hiccup (15, LBW) on the way to a comfortable victory. The migrants still came up against some moments of controversy –a deaf man caught off a ‘bump’ ball; a legitimately run out batsman reinstated for no good reason; and the running out of the Cocker Spaniel himself all provided talking points to an otherwise one-sided affair. Nevertheless, the ten were elated – they had done what they could not do in several other countries. They had won.

That same night, desperate to evade capture, the migrants decided to forage for food and drink outside the compound. What nectar! What milk and honey! Such nourishment these men had not enjoyed for days – coffee stouts were desperately gulped back, exquisitely hopped ales drained as if these men had never tasted decent beer before. Their hideout, a semi-underground bunker, was their first opportunity in weeks to relax, to laugh and joke, to fill their bellies and stir their desires for gambling, talking to touring professional rugby players, and whatever else. And so the hardships of the previous days were temporarily forgotten.

Too soon they rejoiced. As they awoke on the Saturday, the shutters of their rooms in the compound strangely letting in what little light there was, the high spirits abated. A day of activity was soon followed by horrific scenes, described by transient onlooker Mark Selby. “I saw men things I wish I had never seen; men willingly submitting to an “Archimedes Job”, simulating drowning in order to accurately compare the volume displacement of their heads. But they seemed to enjoy it. I escaped as soon as I could – there was no way I could spend another night there. God left that place a long time ago”.

It seems as if that evening was the turning point. The following morning, they fled for one final roll of the dice, and stowed away again in the empty interior of a minivan making the same journey as two days hence. The Cocker Spaniel’s number two, Bill Oddie, gave the men a tougher time in a longer contest that day. Broken men capitulated (Simon, run out, 2), some not even feeling bat on ball (Jack, 0), others clothing the ball to all corners (Henry, 28), leaving Richard to build a mammoth innings (101 retired) worthy of his pedigree – a knock of beauty – allowing the bowlers to finish the game. A neat afternoon session from the Jester (7-1-18-1) and Davidson (6-1-24-2) started things off, with a tidy spell from Mark, the smallest head on tour (4-0-1-14), and a heart-lifting spell of wristspin from the Rogue Rudkin (2-0-10-0), plus another cameo from the deaf batsman. Two wins! Such a feat we are unlikely to see again. Jubilant celebrations were held, primarily in taxis between clubs, but not until the long awaited awards had been dispensed. Best Cricketer inevitably went to Richard; Best Tourist/Imitation of Hugh Pemberton to Jack, with close competition from the Georgian Judge; and the Swede-Off was predictably won by a large carved stone head.

Having exhausted the cricketing potential of Budapest, and themselves in the process, the migrants knew they had to move on. Released from the compound by the eponymous villain Albert, a dribble of whimpering men crawled on to the next leg of their journey, via the most joyless curry lunch ever consumed. Who knows what the future holds for them? Who knows where they will next pass through on their quest? One thing is for certain. Their endeavour, determination, and reliance on a single talented runscorer means that this onlooker, at least, sees brighter times ahead.
​
R. W. Davidson 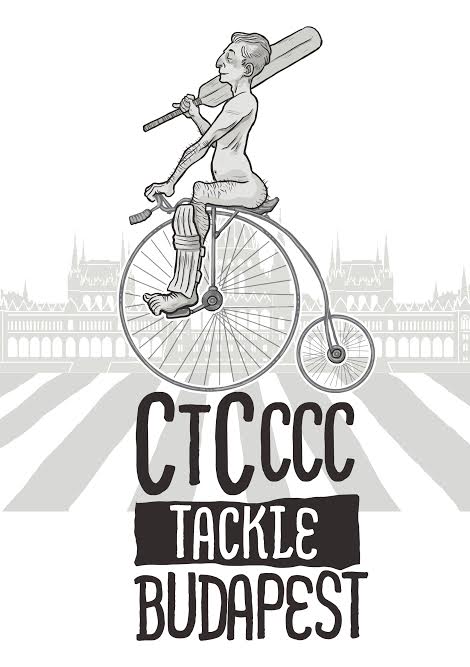